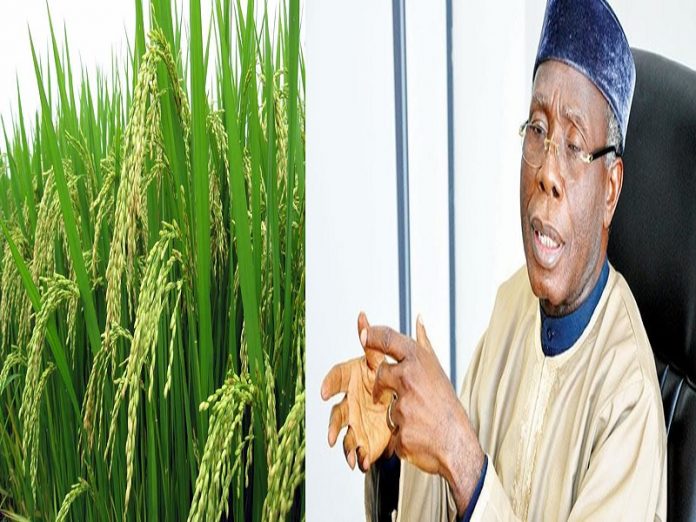 The grain Rice.  Four letters word that means so much to Nigerians.  Rice has become staple meal in average homes of Nigerians.  Eating rice meal in the past has special status.  It was eaten on special occasion such as festive period and ceremonies.  Not anymore. It is easy to prepare as joloff rice, fried rice, white rice, and in northern part of Nigeria as tuwo-shinkafa.

Nigerian populace are increasingly developing an enlarged appetite for rice consumption against distinguished traditional varieties of foods, richly spiced vegetables and flavored sauces and soups meals known in the regions and culture of Nigeria.

At the heart of this unbridled consumption of rice meals is that there is no commensurate capacity to produce rice locally to meet the huge demand.  To bridge the gap between local production and demand for rice, huge amount of foreign exchange have, over the years, been invested in importation of rice into the country.

Former President Goodluck Jonathan’s agriculture transformation programme opened the sector to local and foreign investors and brought back hope to local farmers.  The programme under the supervision of Dr. Akinwumi Adesina, Minister of Agriculture, aimed at reversing the negative trend of food importation, especially, rice, by putting in place mechanism to discourage rice importation and boost local production in the country.

Past governments in Nigeria have been unable to successfully implement different agriculture policies they initiated, such as Operation Feed the Nation, Green Revolution, School to Farm, and others, to drive food sufficiency, including rice production.

At different events during Jonathan’s administration, Dr. Akinwumi Adesina, Minister Of Agriculture was emphatic the government had self-sufficiency food plan, including rice production.  Akinwumi set a target, for the country to become self-sufficient in rice production by 2015, and ban rice importation the same year.  His basis for optimism was because local and foreign investors were queuing to invest in rice farming in the country.

By words and actions, Adesina seemed confident the country’s 2015 target for self-sufficiency in food plan, especially rice transformation strategy was on course.  He said Nigeria was poised at producing more paddy rice and mill the rice at industrial quality grade to ably substitute imported rice and protect investors in rice farming.

According to Adesina, key investors in rice production in Nigeria are Dominion Farms, the largest American rice farm in Kenya, which invested $40 million on 30,000 hectares area in Taraba State in rice production with T.Y. Danjuuma Group.  Dangote Group acquired farmlands in Edo, Jigawa, Kebbi, Kwara and Niger States, a total of 150,000 hectares for commercial production of rice paddy.  These were expected to create thousands of jobs for Nigerians.

At the signing of memorandum of understanding, MoU, between the Federal Ministry of Agriculture and Dangote Group to invest $1 billion for establishment of fully integrated rice production and processing operations in five states in Nigeria, in 2014, Akinwumi said the rice self-sufficiency policy of government was directed at saving billions of Naira annually.

Goodluck Jonathan who presided over the MoU signing said: “It takes a lot of hard work, commitment and discipline to achieve the feat accomplished by Aliko Dangote.  The country is capable of producing rice that can feed the whole of West Africa sub-region”.  He assured the company of protection of the investment with a promise to end the high spate of rice smuggling within the next 12 months.

President Buhari’s government was inaugurated in May 29, 2015.  After the inauguration, Nigerians got from the government a gloomy picture of the state of affairs of government activities.  That it inherited or met “nothing on ground” from the administration of Goodluck Jonathan to work on.  This narrative rented the air and spread across departments of government.  The robust agriculture programme in place on Buhari’s assumption as president was not spared by the narrative.

Dr. Akinwumi Adesina’s stride towards revolutionizing agriculture in Nigeria earned him recognition and facilitated his appointment as President, African Development Bank, AfDB. Why he did not achieve self-sufficiency in food production, especially, getting the country out of the huge cost of rice importation as promised, and what were left undone to get at the target of ending rice importation in 2015, should have occupied public discussion.

At every opportunity, Adesina stated:  “It is lamentable for a country such as Nigeria with huge human and natural resources – land, water and capital, has continued to bear the burden of unbearable pain of rice importation for many decades following huge capital flight and increasing unemployment.”

Equally that:  “Some government officials had virtually grounded the production of rice in the country and had connived with some international businessmen who have continued to milk away the resources that would have been used to develop and boost rice production.”

Today, whatever name Buhari’s government calls what  is been done in agriculture towards self-sufficiency in food and rice production is anchored on the giant stride laid by Akinwumi Adesina – call it “Anchor Borrowers’ Programme, ABP”, launched late 2015, or “Dangote Rice Outgrowers Scheme” inaugurated in Goronyo Local Government Area of Sokoto State, recently.

Buhari’s government major stride in agriculture is outright focus on encouraging local production against massive importation of food, especially rice; and conserving billions of dollars in foreign exchange spent on rice importation, as well as emphasis on agriculture as one of the key areas of diversifying the economy.  The Central Bank of Nigeria, CBN’s active role in developing the agriculture sector is worthy role.

Far away as President, AfDB, Akinwumi Adesina, Nigeria’s most successful Agriculture Minister, has projected that Dangote Group could become one of the world’s largest exporters of rice by 2021.  Adesina stated this recently at Mo Ibrahim Forum in Morocco.  Showing he is still in touch with what he left behind as Agriculture Minister in Nigeria.  This is what experts are made of.

Recalling his tenure as Minister of Agriculture, Adesina said Dangote Group initially planned $300 million dollars investment in the production and processing of rice in Nigeria, three months later, reconsidered it to one billion dollars.  His words:  “If they continued that policy, he would probably be the single largest producer of rice in the world in about four years. The reason why I was so excited about that is that agriculture is cool, agriculture is a business and agriculture pays”.

On his part, Chairman, Dangote Group, Aliko Dangote said he was into agriculture because of government determination to make it one of the mainstays of Nigeria’s economy and reduce food importation that could be produced locally.

Dangote’s words: “In the next three years, we want to produce one million tons of quality rice, make it available and affordable to the people.  We hope to do 150,000 hectares and when we are done, Nigeria will not have anything to do with importation of rice”.

There is general discontent in the country as a result of continues rising cost of living.  Food crisis is becoming unbearable amid skyrocketing prices.  Even locally produced rice is said to be more expensive than imported rice.  Getting to terms with addressing issues of food security go beyond mass production of rice locally.

Beyond rice, Nigeria is the highest producers of yam and cassava in the world.  The country also produces beans, maize, millet, guinea corn, plantation, coco yam, among others in great quantities.  All of these should be holistically addressed along with strategic storage, preservation, distribution system to ensure food security if squarely addressed.

Those presently supervising federal ministry of agriculture and rural development, should take out politics of rice production and seek best tutorial and specialist advice in managing the issue of food security in the country.  More so, this department of government has the mandate to drive government’s policy of making agriculture a mainstay of the economy beyond oil.