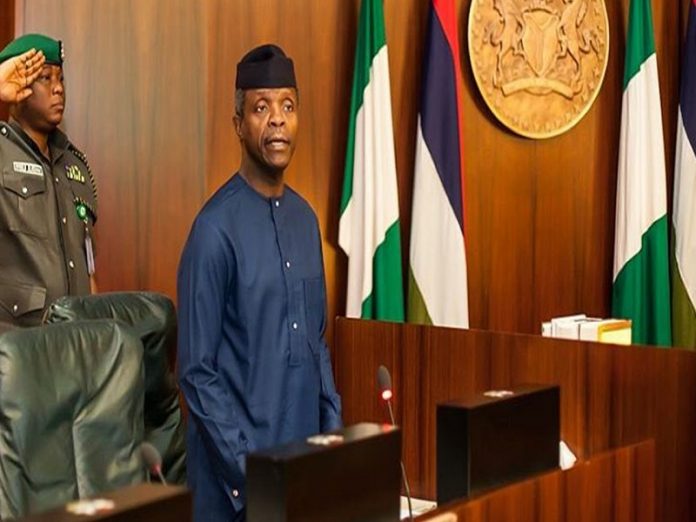 Stephen Ocheni from Kogi State and Suleiman Hassan from Gombe State took oath of office as Ministers of Nigerian Federal Government this morning, July 26, 2017. Nigeria’s Acting President Yemi Osinbajo told the ministers at the swearing-in to actively engage in the task of building healthy national economy that would benefit Nigerians.

Osinbajo’s words:  “We have focused on key areas of the economic reform programme and those key areas have become really what we believe need to be done to make a difference in the Nigerian economic and in the life and livehoods of Nigerians”.

He said the Federal Executive Council, which both ministers have become members was committed to implementing far-reaching reform programmes contained in the Economic Recovery and Growth Plan and other such documents. “So, we expect that our new ministers will also join in this herculean task of turning around the Nigerian economy and making life better for the citizens of this country”.

Osinbajo drew the ministers’ attention to two key areas, apart from the economy, that are centerpiece of the government’s focus.  “Security and anti-corruption being the other two aside from the economy and we expect of course members of the Executive Council to focus on these key areas as well”.

To the new ministers Osinbajo said:  “And also our conduct should be exemplary so that we are able to show by practice not just by words that we are determined to ensure that this country is where there is  good governance and were there is honesty and integrity in service to the people”.

Nigerian Senate confirmed Hassan and Ocheni as ministers in May, 2017.  Ocheni replaced late James Ocholi [Minister of State for Labour] from Kogi State, who died in an auto-crash in 2016, on Kaduna-Abuja highway.  Suleiman Hassan replaced Amina Mohammed [Minister of Environment] from Gombe State, who is on United Nations job.