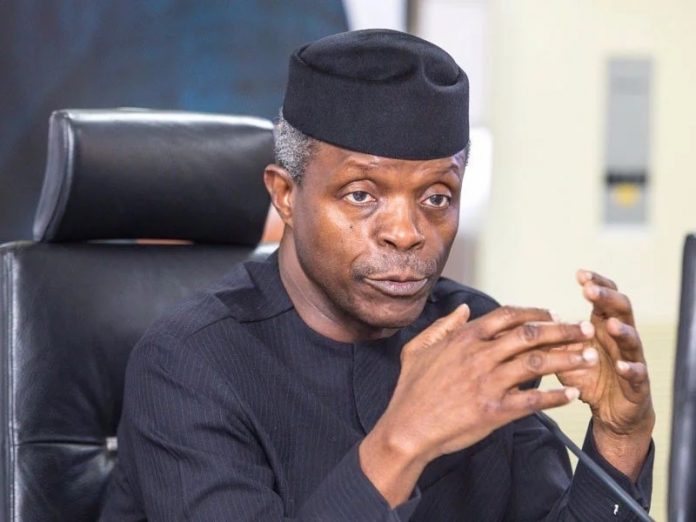 It is time those in charge of Nigeria’s Horn begin to blow the trumpet of nation building.  Acting President Yemi Osinbajo aptly told the board of Nigerian chapter of International Press Institute, IPI, who paid a courtesy visit to him at the Presidential Villa, Wednesday, August 16, 2017, to use 2018 edition of IPI’s world congress in Abuja to project the country’s image globally.

Osinbajo said:  “It is a very important opportunity for Nigeria to showcase ourselves and also to show that Nigeria is safe and secure for business.  It is also an opportunity to advertise all of our ease of doing business initiatives”.

Osinbajo raised a key issue “hate speech” currently heating up Nigeria’s polity:  “The forum is an important one for raising the question of hate speech and its implications for our country, for our polity and for peace and security.  Somehow these things are resonating all over the world, new found nationalism and all of that.  But I think for us here in Nigeria, it is a very important issue.”

He added: “I think that it is important that we find ways of controlling these things.  I think that we owe a responsibility, especially leaders of journalism to find ways of dealing with this issue because it is a cancer”.

On the watch of present Nigerian government, hate speeches, bothering on attacks on ethnic groups are emanating from sections of the country, and are un-abating and distorting peace and security of the country. This new height of hate speeches is disturbing. Eminent Persons Groups – traditional rulers, religious clerics and political elites have mediated to stem the tide.

Acting President Osinbajo’s call on the media to key-in and play its indispensable role in nation building by projecting Nigeria’s positive image globally at this critical time becomes timely.  The media stands as one of the structures that hold the survival of democracy.

Unintentionally, or at times intentionally, the media, in going about legitimate duties, sometimes impact negatively on nation building in Nigeria.  The character of the media is such that negative news sell, and are given priority space. Given the state of Nigerian nation, presently, headline news are on – corruption, insurgency, effects of poor governance, such as poverty, unemployment, decayed infrastructure and host of others.

Churning out these negatives in the volumes Nigerian government pushes them out to the publics – within and outside the country —  the media would be left with no choice than push these negatives out on their headlines.  Government must be restrained in contributing to the perceived excesses of Nigerian media.  There should be demeanour, especially, in government’s claimed “fight against corruption”.

Opinions and views have held that the present Nigerian government had adversely “de-marketed” the country from investors due to public utterances made by officials of government in attempting to justify non-performance. It is on records that some adverse and critical comments about the State of the Nigerian Nation by government officials were made outside the shores of the country.

On the Acting President’s request that 2018 edition of IPI world congress include hate speech in the agenda, Nduka Obaigbena, Chairman, Thisday newspapers,  who led the delegation of IPI Nigerian chapter board to the Villa, told Osinbajo that hate speech would form one of the “thematic issues” to be discussed during the congress.

Obaigbena sought government’s support in hosting the congress, such as provision of secure and safe environment for delegates and visa on arrival, which Acting President Osinbajo obliged.